How to Play Backgammon?

How to Play Backgammon?

Backgammon is one of the oldest board games for two players that dates back to ancient Mesopotamia, some 5,000 years ago. This game’s main goal is to remove (bear off) your checkers from the board before the opponent. Although it sounds simple, it’s not.

Backgammon is a game that combines both luck and strategy. The “luck part” involves rolling the dice. The strategy includes the right selection of movements and anticipation of the opponent’s next move.

This game is not only one of the oldest, but is also one of the most popular ones, played all around the globe. To play Backgammon, you need a board, 15 checkers for each player, and a pair of dice. You can use a doubling cube and dice cups for more fun, and if you like the sound of dice shaking before throwing on the board!

First, you need to understand the board. The Backgammon board has 24 triangles, called points, divided into four quadrants. Each quadrant contains 6 triangles that are different colors. Each player gets two sections, the home board and outer board. They are separated in the middle by a bar.

The triangles are numbered from 1 to 24, and each player starts from the first one. As they sit opposite each other, the first triangle for one player is the last one for the other, and vice versa.

Each player starts the game from the home board. This is the bottom right or left quadrant, closest to the player. Players sit facing each other, so they move the checkers across the board clockwise and counterclockwise in a horseshoe-like direction.

Set up the Board and Roll the Dice

To start the game, first place the checkers on the board. The first two checkers are placed on the player’s 24th point. The next three go to his 8th point, five on his 13th point, and five more on the 6th point.

Then, players throw the dice to decide who starts. The one with a higher number goes first. 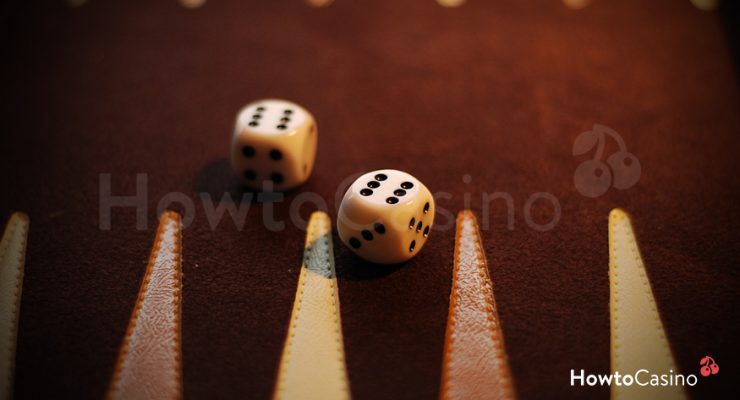 To start moving your checkers across the board, the player throws two dice. The numbers decide how far he can move his pieces. Each dice represent a separate move. If you roll 2 and 6, you have two options. You can move one checker 2 places and the other 6 places. Or you can decide to move just one twice: 2 and 6 places. This is where the tactics come in handy.

You can move the checkers to an open triangle (point) with no checkers or with your checkers. Or to the one where there is only one piece from the opponent.

If the player gets the same number on both dice, he can play as if he had four dice with this number, meaning he has four moves.

In case you have rolled the dice, but you can’t find a free point to position your checkers, you lose the turn. If there is one open point for one of the numbers, you can make a single move and lose the turn on the other.

The point with two checkers, one from each player, is called a blot. Try to hit the blot to move your opponent’s checker to the bar (the middle of the board). This is the best way to slow down the player as he can’t move his checkers before getting this checker back on the board. So, make sure to hit blot as often as possible!

To place back the checker that’s been thrown off the board, you have to enter. To do this, you need to get numbers that will allow you to place this checker onto an open point on your opponent’s home board.

After you have succeeded in removing all your checkers off the bar, you can start moving other checkers. 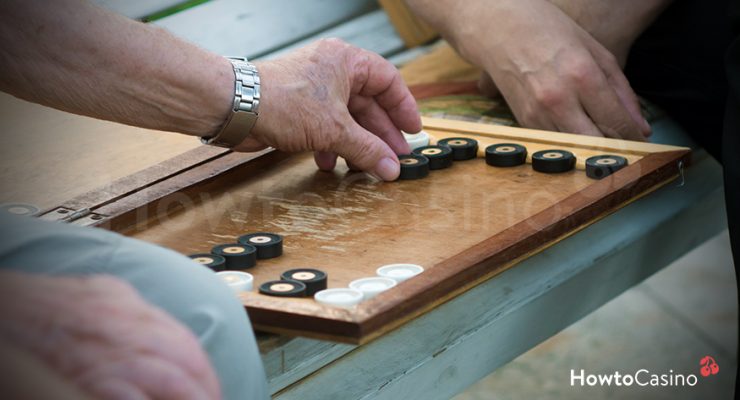 Bearing Off the Checkers

To win in Backgammon, you need to be the first one to have all its checkers grouped in your home board. To bear them off, you need to roll the dice and get a number that corresponds to how far the checker has to move to exit the board.