How to Play Deal or No Deal: The Big Draw?

How to Play Deal or No Deal: The Big Draw?

Home / Live Casino / How to Play Deal or No Deal: The Big Draw?

Deal or No Deal: The Big Draw is an entertaining live dealer game produced by Playtech. This game follows the theme of the iconic TV show which goes by the same name. This game is all about player engagement. With six points of decision making scattered throughout the game and an entertaining mini draw side game, the action never stops.

The goal in Deal or No Deal: The Big Draw is to win as much money as possible. You can do this either by accepting the banker’s deal or holding on to your suitcase and hopefully claim a bigger prize.

This guide teaches you the ins and outs of Deal or No Deal: The Big Draw.

Getting Started in Deal or No Deal: The Big Draw

Before we go any further, you need to understand the setup of this game. Only then can you confidently move on to how it’s played.

Players are presented with a system of 60 balls, randomized by a blowing device. The first stage of the game extracts 20 balls.

The numbers on these balls are matched to the 15 numbers on your ticket. These ticket numbers represent suitcases with prizes in them.

Successfully matching seven numbers will earn you a deal from the banker. You can choose to accept this deal, or reject it and even switch suitcases.

Now, let’s look at how you play this game. 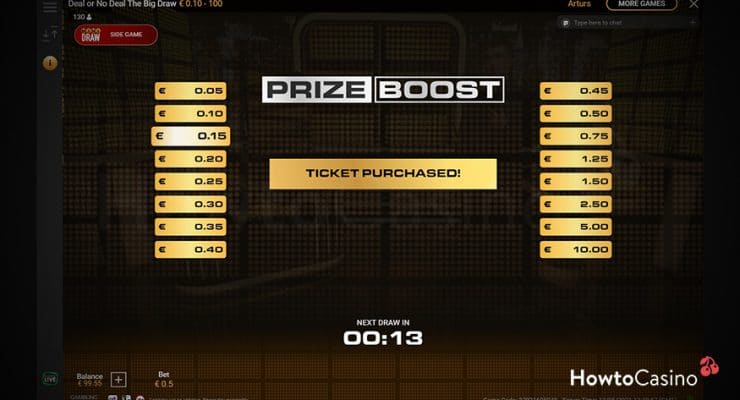 The first thing you need to do when playing this game is to buy a ticket. You can get a ticket for as little as $1, but the value of the ticket is directly related to the prizes you can win. 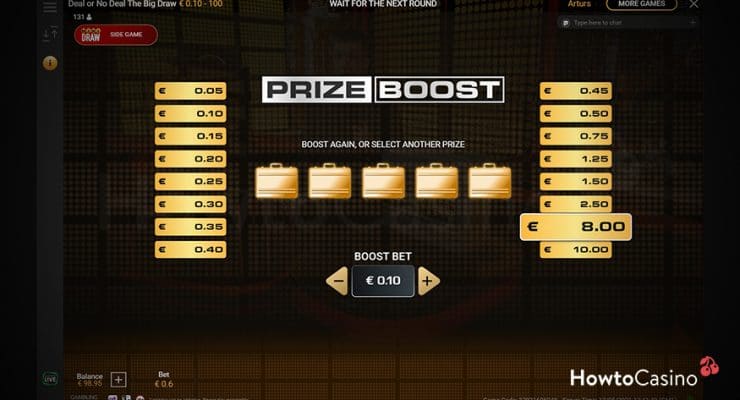 This game also allows you to boost your prizes. This is a gambling style feature with which you can boost your potential gains to get maximum reward. But you need to act quickly, the prize boosting feature expires after 1 minute.

After the period set aside for boosting your prizes has expired the game proceeds as we have described earlier. Remember, your first goal is to match seven numbers so you can get the banker’s offer. If you get more than this, the banker’s bar has a multiplier feature that will add to your earnings.

When this offer comes, you can choose to accept the deal and take what the banker is offering you. You can also hope, turn down the deal and reveal the prize in your suitcase instead.

If after the first 20 balls you have not matched seven numbers, you can buy five more balls, and the game continues. In Deal or No Deal: The Big Draw, you can only win when you get the banker’s offer. 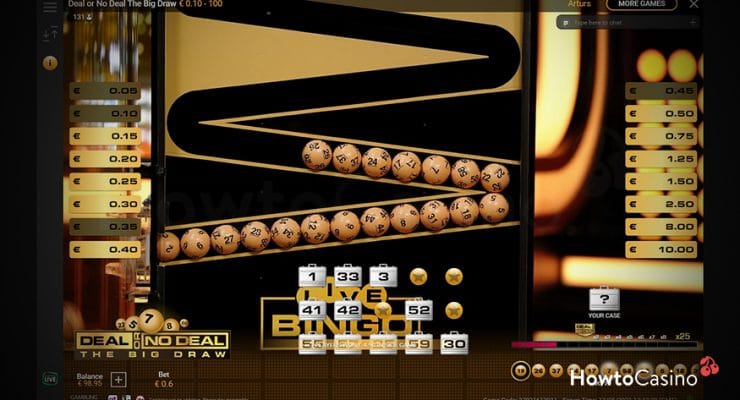 The Mini Draw Side Game

Deal or No Deal: The Big Draw has a bingo-style mini-game that you can play. You can buy up to 20 mini cards.

The mini draw only applies to the first 20 balls drawn. Your winnings are determined by the number of lines you match on the cards, just like when playing bingo.