How to Play Caribbean Stud Poker?

How to Play Caribbean Stud Poker?

The standard game of poker can be quite different from its derivations. Such is the case with Caribbean Stud Poker, a game which was originally introduced in the 80s and became a beloved poker variant around the world, in both land-based and online casinos.

What else makes Caribbean Stud Poker irresistible? The fact that it comes with a progressive jackpot! 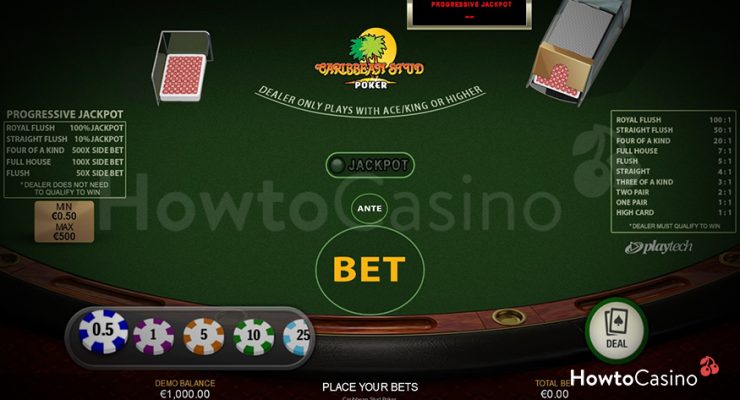 Prior to any other action, you need to get familiar with the game rules and how it all plays out. Caribbean Stud Poker is a cards game where hands are compared – in this case the player’s hand and the dealer’s hand – to see which is stronger.

Five-card hands are formed over the course of the round and evaluated at the end. Since there are no draws allowed (participants cannot ask for additional cards, nor can they replace any of the cards they got), the player only has two options with the hand he/she is dealt – to play it or to fold.

Special rules are applied for the dealer’s hand, as he needs to qualify to play based on the cards in his hand. Only one hand per player is dealt. 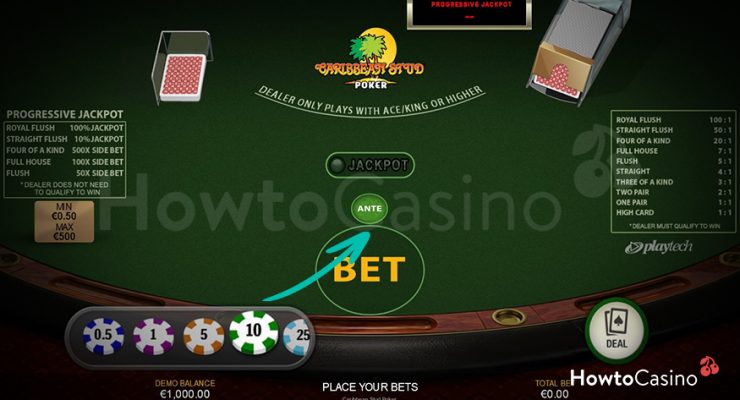 The dealing in Caribbean Stud Poker comes after placing the Ante bet. This is the first thing you need to do as you join the table and enter a new round. The Ante bet is the initial bet played at the stakes determined by the casino (it has its minimum and maximum limits).

You make this bet as any other – by placing chips in the right spot on the casino table/betting area. Ante bets must be placed before the dealer (or the software if you are playing online) announces that the time for bets has expired. 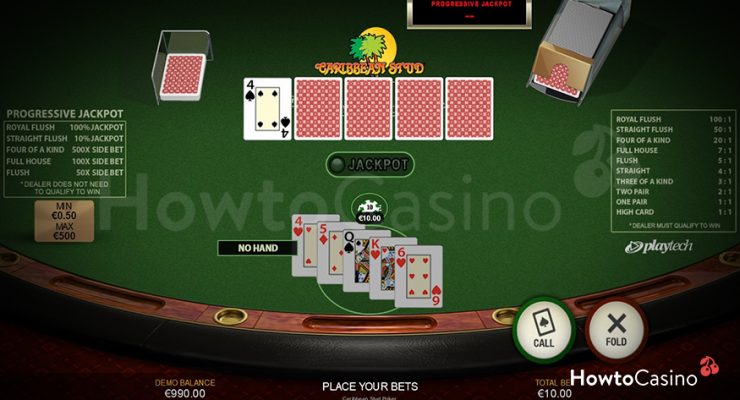 When ante bets are placed, the croupier/software can proceed to deal the cards. Each participant is dealt 5 cards, including the dealer himself. The cards are placed face-down. One card is flipped over from the hand that belongs to the house and shown to all the players (typically the last card dealt is the one to be turned face-up).

Now that you have had a look at one of the croupier’s hands, you get to see your hand completed and decide whether you want to fold or play. Folding means you will lose your Ante bet and you will be suspended until the next round.

Should you decide to play you will need to make an extra bet, one that’s double your Ante, on top of the initial wager. After the players have made their decisions, the dealer can look at his hand.

However, the house needs to qualify to “open” the hand, to compete with it. The hand qualifies if it contains both an Ace and a King or if it contains a pair or any higher-ranked poker hand. The hands are compared and the stronger hand wins. 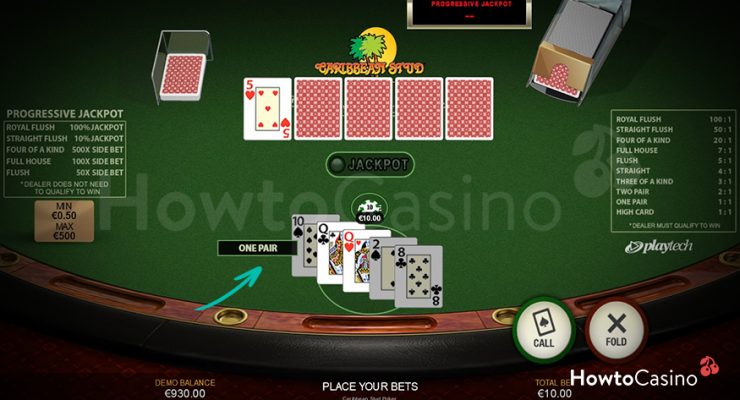 In any type of poker, different combinations of cards are valued differently so that it becomes clear how the winner is determined in every round.

This is referred to as hand ranking or hand hierarchy. The higher the rank, the better the odds of winning – and the bigger the payout. Here are the hand ranks, from highest to lowest: 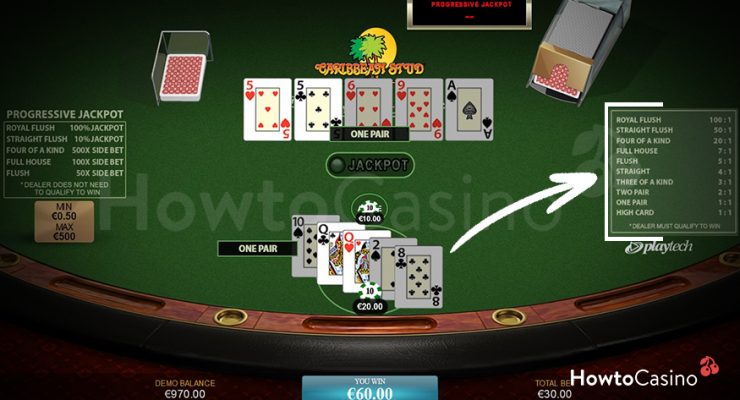 In the round finale, the outcome becomes affected by whether the house can qualify or not. If the croupier can’t “open” their hand and you have made the extra bet, you will get your Ante paid out at 1:1 odds. Your extra bet is considered a “push” and returned to you. If the dealer qualifies and you have made the additional bet, the hands are compared.

If your hand is higher than the dealer’s hand you will be paid the Ante at 1:1 odds and your extra bet according to the payout chart. The payout tables may differ depending on the game you choose to play and the casino you’re playing at, but these are the most common payouts:

If the dealer’s hand is higher than your hand, you will lose both the Ante and your additional bet. The hands of other players will have no impact on this. 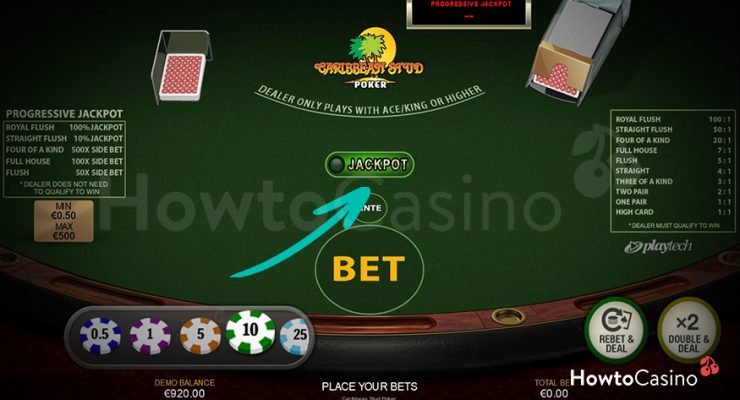 Early in the game, during the period when you’re placing your initial bet, you can also choose to place a small bet that participates in the progressive jackpot pool. The jackpot is awarded only in the case of forming high-ranked poker hands and the amount you stand to win varies, as all jackpot bets contribute to the pot. 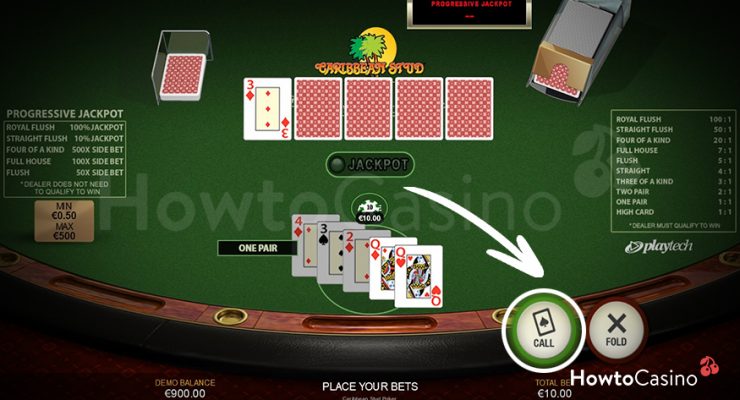 The best tip you can adopt and apply is to practice for free before you start playing for real money. Following that, you must be mindful of your money management skills. Once you’ve checked those two boxes, you can pursue other tactics and strategic approaches to improve your game.

Most Caribbean Stud Poker players would normally vote against the progressive jackpot side bet. The house edge on it is sky-high and if you play it often it does prove to be unfavourable. Of course, try it out sometimes if you want to go on a thrill ride, but don’t rely on it in the long run.

More useful advice includes the recommendations to play the extra bet when you have a Pair or better and to fold if you don’t have at least an Ace and a King in your hand.