How to Play Let It Ride?

How to Play Let It Ride?

Let It Ride is a version of poker that many people claim is easier to play than standard poker variants, because there is less skill involved. Compared to other card games, Let It Ride is usually played at a more relaxed pace and attracts players who are not keen on playing it fast and also beginners.

Inspired by traditional poker, the game resembles Caribbean Stud. It was invented by ShuffleMaster, a company that manufactures automatic shuffling machines for land-based casinos.

You don’t have to beat the dealer; you just need to create a winning combination of cards which can bring you a payout based on the strength of the hand. Before you wager on Let It Ride (some version are called Let Them Ride), here’s what you need to know. 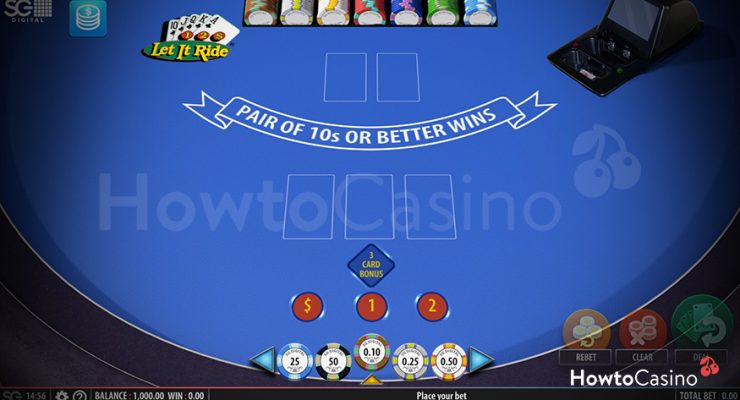 Go Over the Basic Rules

A game of Let It Ride uses a standard 52-card pack. The players are tasked with forming the best possible 5-card hand based on the three cards dealt to them and two community cards.

They also need to place bets and hope that they win, unless they will lose the bets. It’s quite simple. There are three betting circles, and the rules indicate that the bets placed must be the same in all three circles.

For example, if you place a bet of $/£/€10 in one circle the other two bets must match this amount. The table limits will be displayed and probably indicated on the table, so that you know how much to bet.

The two community cards are initially dealt face down and revealed one at a time over the course of a round. The players will have two opportunities to withdraw exactly one-third of their initial wager.

If the player decides not to withdraw any part of their wager, they are “letting it ride”. The dealer is not the opponent. The objective of the game is merely to get a good poker hand. 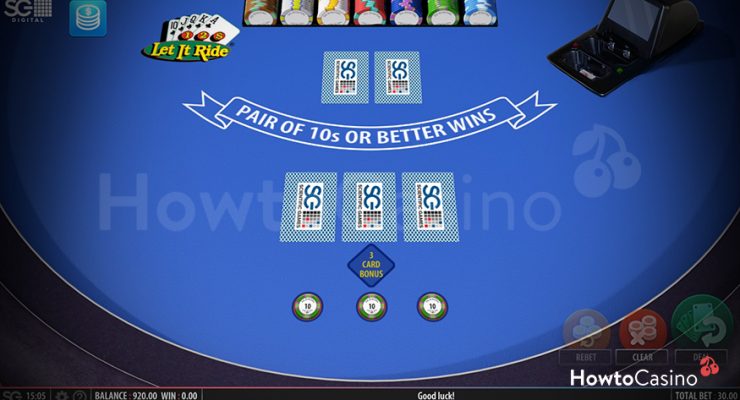 In Let It Ride, you will be paid according to the paytable for your winning hands, which are ranked just like in any other poker game. Here’s a reminder of the poker hands hierarchy, from highest to lowest: 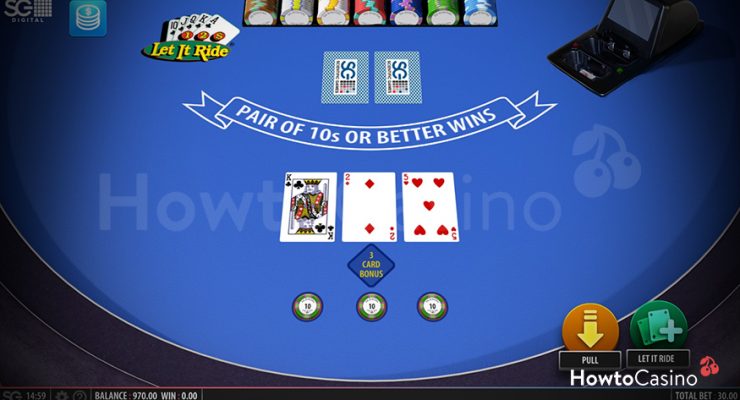 Let It Ride Round Playthrough

As is customary with card games, the round starts with the players placing their bets by dragging chips of selected value to the betting area. We’ve already revealed that there are three betting circles on the Let it Ride table.

The player’s initial wager needs to be divisible by three, so to ensure that each player must distribute their wager between over the three betting spots which must all contain the same chip value. The Ante bet, often given the symbol $ can never be withdrawn, while the values wagered on the circles 1 and 2 can.

In online Let it Ride, the software simply deals the cards according to the game rules. The players get to look at their cards and decide, based on the strength of their 3-card hand, whether they want to withdraw the bet placed on circle 1 or let it ride. Then the dealer/software exposes one of the two community cards.

The protocol repeats – the players need to decide to either let it ride or withdraw their bet on circle 2. Once you make your decision on circle 2, the second common card will be turned over. The players expose their cards and winnings hands are paid. 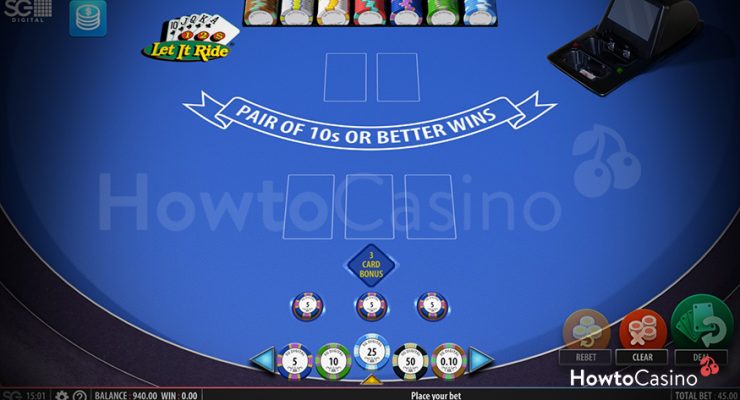 Let It Ride Side Bet

Depending on which casino you choose and which Let It Ride game you load, you may be offered a side bet. The extra bet may be based on the 3-card hand or on the complete 5-card hand.

While an additional bet can add an extra fun element to the game, most poker experts will advise you to avoid it as its odds favour the casino and, in most situations, it will not offer you value for money. 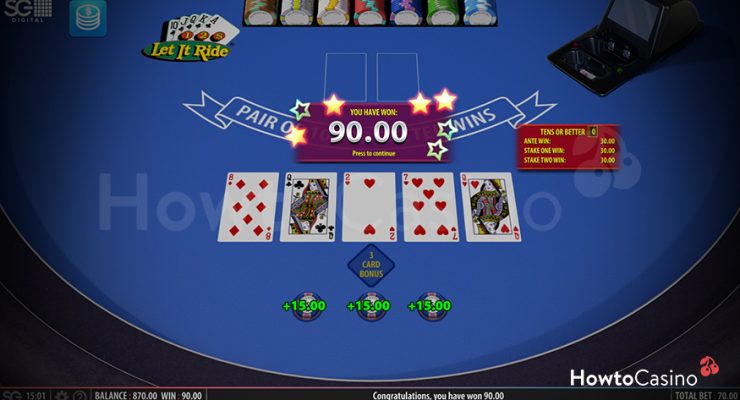 Many web-based casinos will allow you to practice Let It Ride online for free. You can simply go to the website and play online Let It Ride for free and take advantage of that time to learn the rules, practice your moves and try avoiding making mistakes that can be costly once you switch to real money play.

For fun and practice, you don’t have to be overly picky, but when the time comes to wager real money, you need to be on the lookout for casinos that are respected brands, well-known and proven fair.

They ought to be reliable for issuing payouts and not make you wait for your withdrawal longer than absolutely necessary. Unlicensed casinos and those with confusing terms and conditions should be avoided. 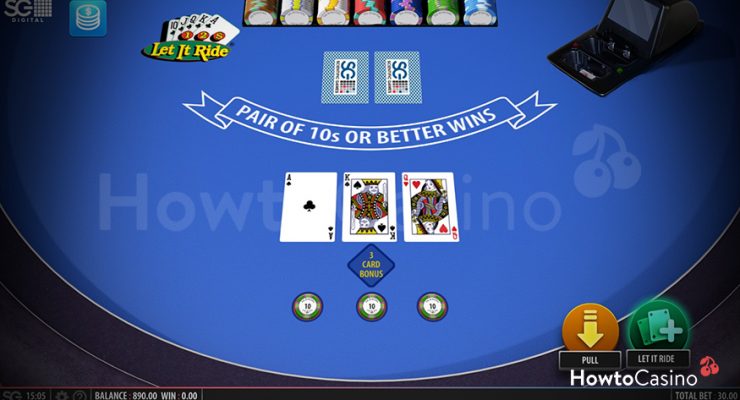 Doing your research about Let it Ride will surely unveil some tips, tricks and useful bits of advice that you can rely on once you’ve reached a decent level of skill. Use them to improve your game and maximise your winning potential. Good luck needs to serve you for the tips to work, but distributing the best moves should pay off in the long run.

Most experienced bettors will advise to let it ride after the first 3 cards are dealt if you have a Pair of 10s or better, any 3 cards that make up a Royal Flush, any suited three cards in a row, where the lowest card is 3 or above – and there are many other recommendations out there, so dive in and benefit from the tips that suit your play.